As I was snipping into some bacon recently to make my Machine Shed Baked Potato Soup, I was in awe of my kitchen shears for perhaps the millionth time.  In the past, I’ve struggled with dicing up bacon.  If it’s not cold enough (some people suggest putting it in the freezer for a bit prior to cutting to help), it will simply tear apart, rather than make a nice slice.  SO frustrating!  I’ve had ooey, gooey bits of bacon fat string out, even when I use my good knife.  But with the kitchen shears, not only did I not have the stringy problem, I also didn’t have to plan ahead to put my bacon in the freezer first.  I could simply take it from fridge, cut it into the size I needed in two quick snips, and go.  With a smile on my face, I might add.
I also love, love, love to use kitchen shears while making my monkey bread.  I use canned biscuits for my monkey bread, and I snip each biscuit in half with my kitchen shears in a matter of milliseconds.  No cutting board needed.
Same with pepperoni or Canadian bacon for pasta salads, adding to mac & cheese, etc.  I know you can buy mini pepperonis for such dishes now, but if I already have the regular size version for my Friday pizza nights, it’s much more economical to use that size & snip it up rather than spend more money simply for a smaller version.  And I can cut several slices of pepperoni at the same time with my kitchen shears.
I know some people who even forego the traditional pizza cutter in preference for using kitchen shears to cut up their pizza.  And kitchen shears do great work to snip up just about anything into child-size bites for little fingers & mouths.
You can spend big bucks on nice kitchen shears.  But the ones I got with my cheap knife block when we got married 12 years ago work just great.  So do the second pair I got for about $5 at Walmart a couple years ago when I was fed up that my other ones were always dirty when I needed them.  (We do dishes as little as possible, though it seems that’s becoming more & more frequent the less we eat out these days.)  They are Farberware brand & even have a little plastic guard for the ends that snaps into place easily.  (Pictured shears are similar to mine.) 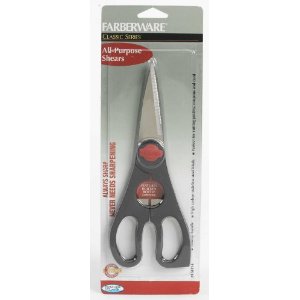 0 comments on “Must Have: Kitchen Shears” Add yours →